If you look far enough back on this blog you'll find a lot of jabbering about the Bicycle and Pedestrian Advisory board (of which I'm now a member).  At some point a little group got started within BPAC that wanted to get a free light program together.  I got a few grants ($1500) from local Neighborhood Advisory Boards and NDOT kicked in about $3000!  Well after much bureaucracy with NDOT we finally got the purchase to go through with Planet Bike.

So, on this, the shortest day of the year we officially have the lights in hand (and free helmets) to begin the program.  Not bad for something that started last summer!  Anyway, they are similar to what you see below.  I'm going to try to grab a few sets today from the office and dole them out over the holidays.  There will also be upcoming distribution days and locations listed here and hopefully advertised in the local media.  So keep an eye out if you need a set of lights!

Since it's going to snow this weekend....


Someone should try this and let me know how it works out!

Ah, I guess that should be spelled Chilly Toes.  If you've been riding I'm sure you know exactly what I'm talking about.  I've been on my mountain bike lately (because I've been too lazy to rebuild my xtracycle) and this means I have to actually use my bike shoes.  Yes, believe it or not I do own clip in pedals for my more "serious" riding.  The problem is these types of shoes are designed for "serious" riders....who apparently only ride when it's warm out and ventilation of the feet is paramount!  Not the best for days when it's 10 degrees outside for the morning ride.

If you don't think it's been cold in the morning just check out the ice flows in the truckee!  Little slushy patches were everywhere the last couple days, along with ice lining the river banks! 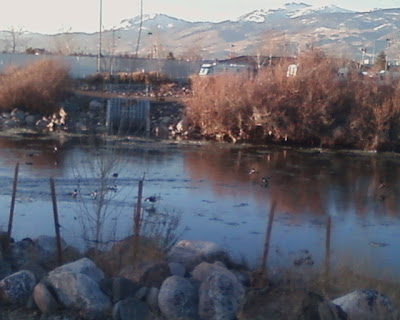 So stay warm out there and protect those piggies!
Posted by Riding in Reno at 8:45 AM No comments:

Ok, so I'm borrowing this from 26inchslicks (a Spokane bike blog) where the author has actually created one of these on his own.  The video is just too great to pass up on.

To be honest it does make you think on a little bigger level than cool wheelies (and they are cool).  This is the type of things kids used to wish for for Christmas (and Daisy Red Rider BB Guns), not PS3 and halo 4.  Notice that the average size of each of the kids (and the dad who's rocking the wheelie bar).  Not a fatty overweight kid in sight. Perhaps it's because they spent a bit more time outside riding bikes and not playing video games!

Looks like lego has fallen victim to the designing wider and wider roads!  Time for a road diet! 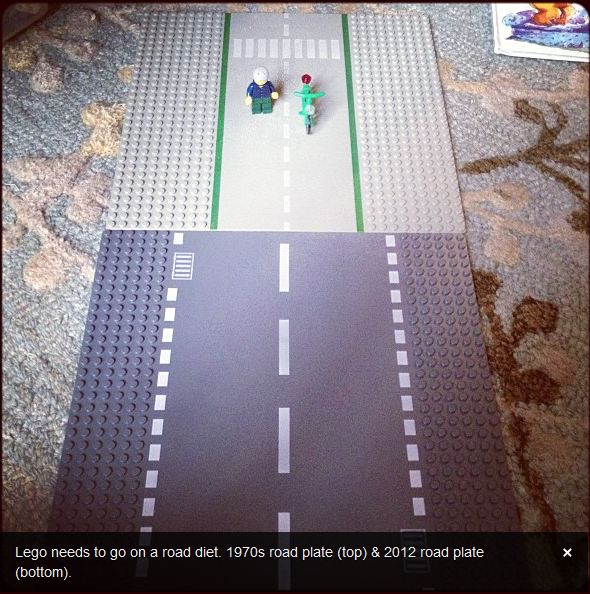 Posted by Riding in Reno at 9:04 AM No comments:

When you ride your bicycle regularly for transportation you really do start to notice things around town.  One of those things is how much detritus, debris, and garbage is on the streets.  This is more true at the edges of the roads as vehicle traffic tends to kick things to the side of the road.  The problem is....this is where we put our bike lanes.  As a result they are continually full of junk.  The result is that rider (especially roadies with skinny tires) tend to ride toward the vehicle side of the bike lanes and this increases interaction with traffic.

Today however, I found the "debris" to be a little more substantial! 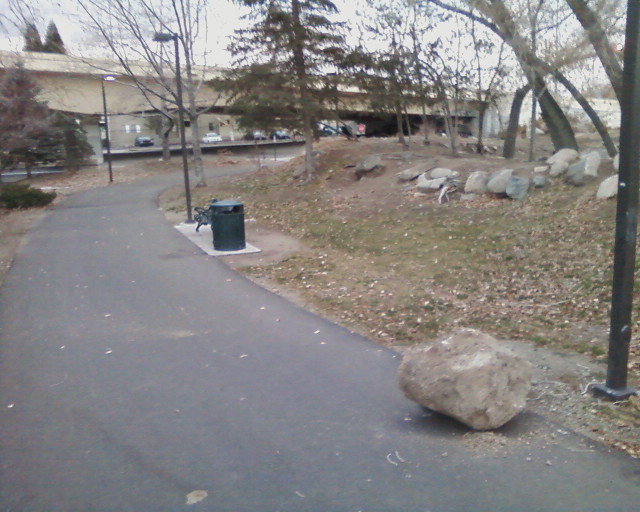 Now of course this is on the river path, so traffic is no concern, but I'd hate to not be paying attention and hit this.  I did stop and try to remove it.  Rest assured it is definitely still right where you see it in the picture!  So if two are three of you are riding together you might be able to roll it off the trail but it's not a job for one person.

Posted by Riding in Reno at 8:33 AM No comments:

I realize that shopping carts are the Xtracycle / SUV of the homeless, but then why do they abandon them!  I mean really, finding a cart at the grocery store that doesn't have a bum wheel or a broken baby seat is kind of a chore.  Once you have one of the good ones don't you want to keep it!? 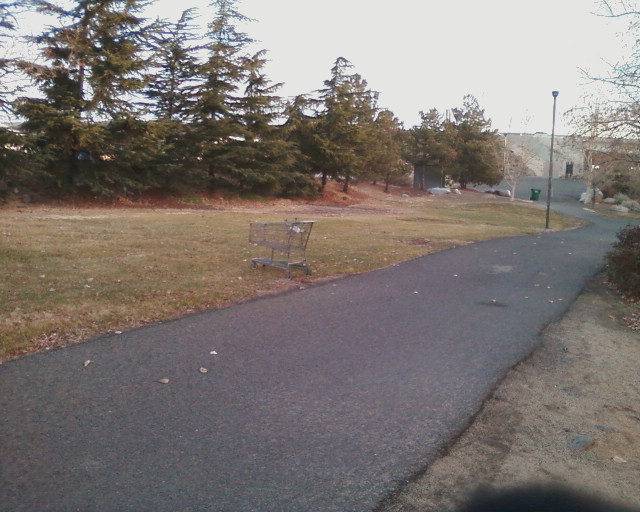 Posted by Riding in Reno at 8:23 AM No comments:


Ok, to be fair, I still have a bike that doesn't even use indexed shifting.....so I may not be the guy this particular component set is designed for.  I'm just not sure I see the need for wireless shifting.....or twelve speed cassettes.  The part that caught my eye is that the thing comes with a "separate" wireless control (at about 1:17)....meaning not part of the brake/shift lever!!  I'm guessing so your coach can shift for you!?

Seriously though, I don't want the setup.  I want my friends to have it....and I just want the remote!  Now that would make group rides all kinds of fun!  I know, it's an evil prank....but if it was available at a reasonable price right now you'd all be out buying it just for sport!
Posted by Riding in Reno at 3:39 PM No comments:

No bike riding for me today.  I popped up to Mt. Rose for a 1st day of skiing.  Not bad at all.  7-9 inches of nice soft stuff.  The "100% open" chutes were closed....but I'm sure they'll open again later in the day while I'm stuck at work.  So if you were wondering if the hills are ready, the answer is yes, so head on up and check out the snow!

Normally I'd say biking with kids is safe, but..... 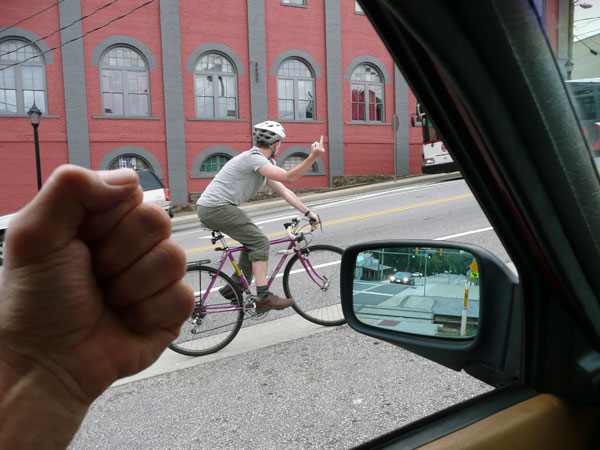 Interaction between cars and bikes happens every day and for the most park it works pretty well.  For the record both parties are stupid at times and that's just how it works.  Probably if each party considered the others perspective we'd get along that much better.

That being said....between the ride home last night and the ride in this morning I've been cut off by two vehicles.  Meaning cut off to the point that I physically made contact with the vehicle.  Now mind you both "contacts" occurred at about 1 mph due to me slamming on the breaks.  So people, please, pay attention to what you're doing out there regardless of if your driving or riding!!

So, on to the story. Riding home last night....I have two lights in the rear and about the brightest front light you can buy.  Lady passes (and gives me plenty of room).  Proceeds to veer into the left lane....I'm thinking she's parking on the that side of the street.....until she does the power right turn across both lanes into her driveway.  Remember, she just pasted me less than 100 yds before this......I caught her broad side in the passenger door and dam near ripped off her mirror in the process.  Her response, "Oh, Sorry."

She was pretty old so I just blew it off and headed for home.

Cut to this morning on the bike path.  I'm rolling through Fisherman's park across from the Mental health hospital.  There used to be a park here, but since they revamped the sewer treatment water intake, the park is gated off.  Just coming out of the park road is a small city garbage collector truck.  He looked at me, saw me coming and then drove across the path directly in front of me.  I had a nice rear wheel locked slide until I bumped his door and "politely" let him know how I felt about his lack of attention.  He just stammered in return.

I don't know what the problem is with folks.  I guess they just aren't paying attention and perhaps don't think bicycles can move that quickly.  Either way, PAY ATTENTION and this type of thing won't happen.

Posted by Riding in Reno at 9:56 AM No comments:

Email ThisBlogThis!Share to TwitterShare to FacebookShare to Pinterest
Labels: Cut off, Pay Attention, Watch where you're going


So as I said yesterday, I've been traveling a bit, both for personal and work reasons.  The whole thing started out with a trip to Portland that has become a bit of a tradition.  It's focused around a week long holiday ale festival that happens in the center of downtown.  With no camera I don't have good pictures....but imagine an entire city block covered in clear roofed tents (two story tents with an actual second floor) with a giant (60 ft?) Christmas tree in the middle and about 100 beers on tap.  Yeah.....that's Christmas!

We also spend a considerable amount of time hitting up some of the 70+ breweries in Portland and checking out some of the great food they have.  In the wanderings this year I came across this: 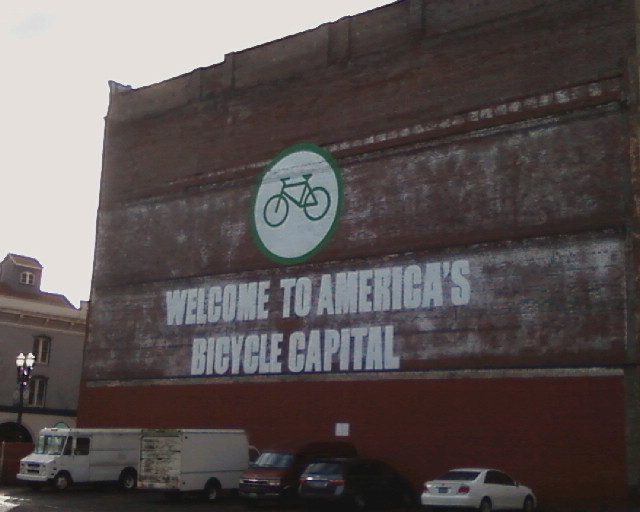 Now if that's not pride in your bicycle culture I don't know what is!  I guess we still have a ways to go here in Reno. 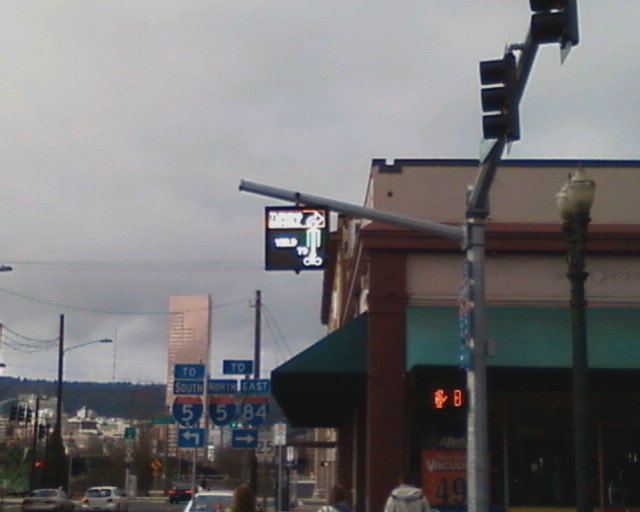 This one is a terrible cell phone picture of a bicycle specific signal that tells right turning cars in a busy intersection they have to yield to bicycles!  Specific light up signals for bicyclists protection!  Only in Portland!

Ok....so that was the theme for Portland.  After being home for about 36 hours I then headed off to Spokane for a work trip.  Actually, I was a booth lacky at a conference, running a bunch of demonstrations on some of the software we use here at work.  Not to strenuous, just long hours and boring.

The main highlight for me was meeting a guy named Tom.  The interest should be obvious even in the blurry picture.  Many a hipster dreams of a beard like this. 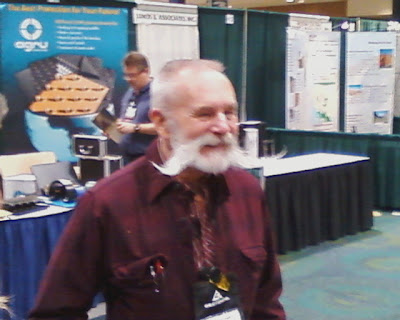 Tom didn't fit the hipster profile (shocking).  Although being in the mining industry he did profess a fondness for blowing stuff up (which seems hipster-ish).  The whole time I talked with him however, I was picturing the aerodynamic effects that mustache would have while riding!  In Tom's case this riding would probably be a horse, but hey....I did say I was bored most of the time.

Conferences like this don't allow you outside much, so I didn't get to really explore Spokane.  Bicycles are pretty prominent and there are signs of it everywhere.....like this: 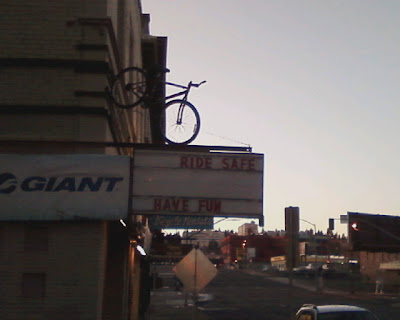 So all in all that's why things have been quiet on the posting.  I'm done with travel for a while so I'll try to keep things a bit more up to date.

Posted by Riding in Reno at 9:30 AM No comments:

Sorry about the lack of content.  There has been a glut of travel over the past week and a half and I just haven't been sitting in front of a computer enough to get anything up here.  Not to worry....those travels have included Portland and Spokane, so there will be some bikey content shortly.

I say shortly because for some reason my phone isn't letting me dump pictures......and we all know you're not visiting this page for the dynamic verbal banter!  So as soon as I have my tech issues resolved I'll share a bit of the recent adventures. 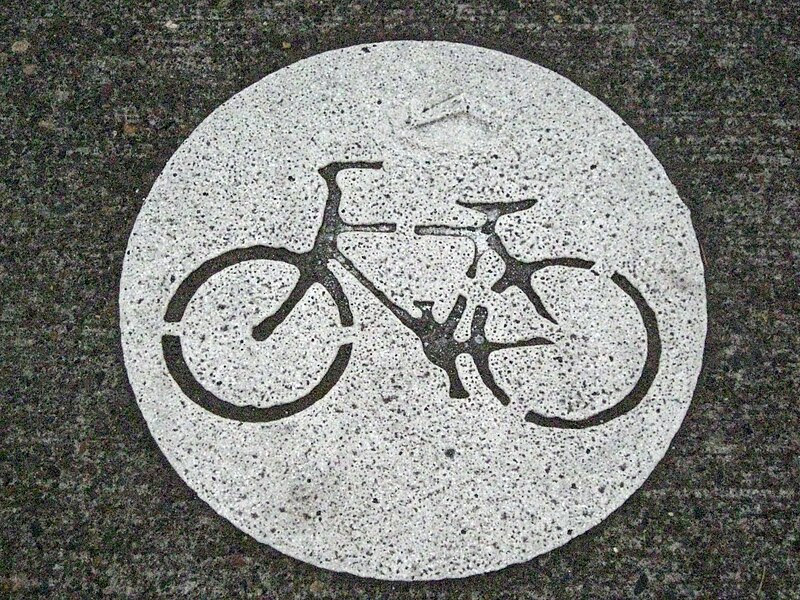 Posted by Riding in Reno at 8:42 AM No comments: