Are you a Winter Cyclist....


If not...perhaps this gal will inspire you.

Email ThisBlogThis!Share to TwitterShare to FacebookShare to Pinterest
Labels: biking in the winter, winter bike commuting

I hope everyone had a good holiday break.  Here's a few pics (totally non-bikey) from my experience.

Growing old is mandatory....growing up is optional.

I had another friend join me today on the plus side of 40....

Email ThisBlogThis!Share to TwitterShare to FacebookShare to Pinterest
Labels: Over the hill

Things that pass you by....

I don't have a picture to go with the start of this post, so I guess it will have to be a written account.  I was merrily headed in on my commute today, kind of picking my route as I went (because going the same way every day gets boring).  Then just as I had settled on riding down Mill St.....a rider turned a corner in front of me and headed for the river path.

I debated for a second and decided I hadn't had a good game of chase in a while.  The rider probably had a 1/4 mile on me and looked to be on a road bike....perhaps clad in spandex?  The reason for the sketchy details is that while there was chase given, there was no catching.  The rider (male?/female?) was no slouch and I never gained (or lost for the record) an inch on him/her.

So apparently, I'm getting slower, is the only conclusion I can draw from this.  And it's probably true.  I missed the whole Cyclocross season due to the shoulder thing, so I didn't have any excuses to push myself on the bike.  The result is probably that the legs aren't quite what they were some years.

So with that in mind....I found a video of the Bend Cross Crusades race that I really intended to go to this year but didn't.  Please notice while there a ton of fast riders in this event....there are also some not taking themselves to seriously.  I believe I will have to take a lesson from this! 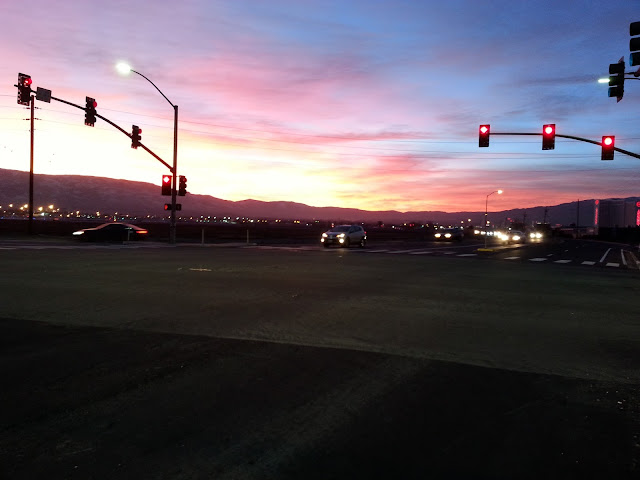 Not a great picture....but boy was it a great sunset on the ride home the other day.  Can't beat that!
Posted by Riding in Reno at 7:59 AM No comments: 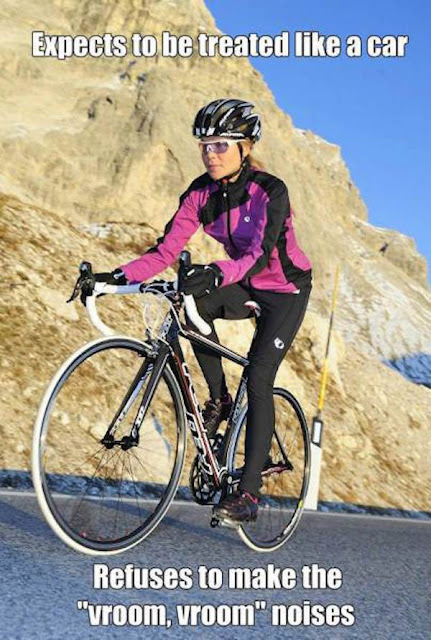 How can you ride a bike in this weather!?

This is a question I get asked a lot this time of year.  The temperatures are dropping (22 when I left the house), snow is flying, and people waste gas warming up their cars.  The short answer is it doesn't even take that much.  This is what I wore this morning:


Yep, no long johns or wind pants....and no shell jacket (although I carry both just in case).  The reality is once you're pedaling you generate quite a bit of heat.  And yeah, it's a bit chilly at the beginning but it just reminds you that you're alive!  So don't let the cold weather stop you from getting on the bike and enjoying an absolutely beautiful morning ride!
Posted by Riding in Reno at 9:00 AM No comments:

Commuter Credentials....If you rode yesterday and today, you have them!

Yeah...so I don't have fenders on the Fargo right now.  You know, because I was all set for the cyclocross season that got nixed due to the bike vs. car crash and resulting shoulder issues that have dragged on.  Turns out that's not supper cool when the snow and slush roll in!!

Ok, I know a lot of folks stop riding when it gets colder.  I don't happen to be one of them...in fact, I think it makes the commute that much more interesting.  It's really just about dressing for the weather.  After you've done it for a while it's second nature.  However, I do have one particular area that always seems get exposed to the cold. 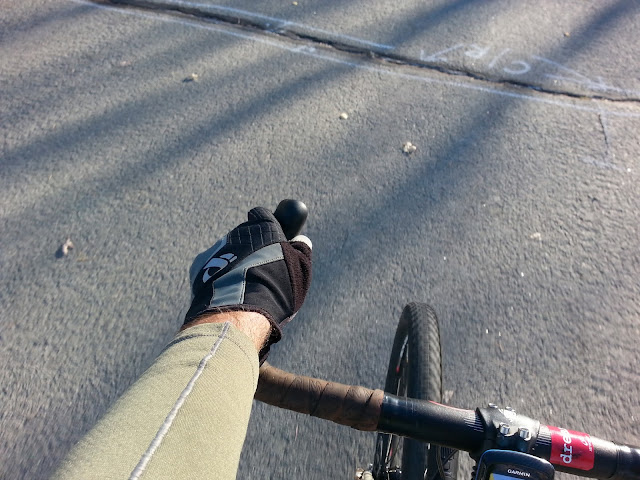 Yep, the wrist.  I don't know if I have an exceptionally large "ape index" (how long your arms are vs. your body) or if clothing manufacturers just don't make sleeves that are long enough when your arms are extended.  It's a problem I have with almost all of my long sleeved shirts when riding.

I feel like I need to invent a "wrist buff" since most cycling specific gloves don't have much of a gauntlet.  Who knows....it might just be a million dollar idea.  Anyway, that's the worst part of cold weather riding for me.  What sends a shiver up your spine on the commute?
Posted by Riding in Reno at 8:45 AM 1 comment:

Back in Bikey Action!


I know that some people think it's getting a little chilly for bike rides.  That's so not the case.  I think I even enjoy the colder weather more than the summer weather.  No sweating, can ride in my work close, and low traffic in the bike lanes (ok, this is always true).  So don't give up on the commute!
Posted by Riding in Reno at 9:27 AM 1 comment:

Motivation for a Chilly Morning Ride!

Email ThisBlogThis!Share to TwitterShare to FacebookShare to Pinterest
Labels: bike commute, chilly temps, get out there

It seems like I haven't been on a bike in ages (you know...like 4 days).  A combination of things has contributed to this (vet visits with dogs, an increased running schedule, visitors at the house).  It really does have me questioning how the "regular" Joe manages such a large driving schedule!?  It's stressful really.  Morning traffic, backed up highways and secondary roads, aggressive drivers, people texting while driving and holding up intersections, etc. I find myself wistfully looking at the wide open bike lane that I could be whisking along in with no traffic concerns.  The relaxing rhythm of the ride, the calming zen of letting my thoughts wander, and the nice little bit of exercise I add to my day! 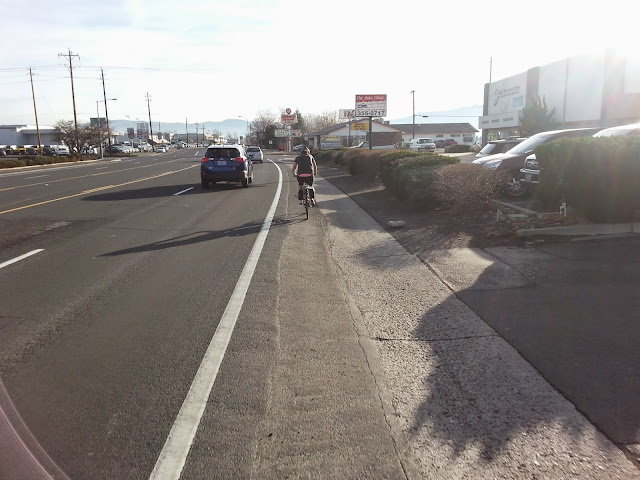 So tomorrow I pledge to ride.... come rain, snow, errands, or sloth!  How about you?
Posted by Riding in Reno at 9:46 AM No comments:

Email ThisBlogThis!Share to TwitterShare to FacebookShare to Pinterest
Labels: Missing the ride, Ride vs. Drive 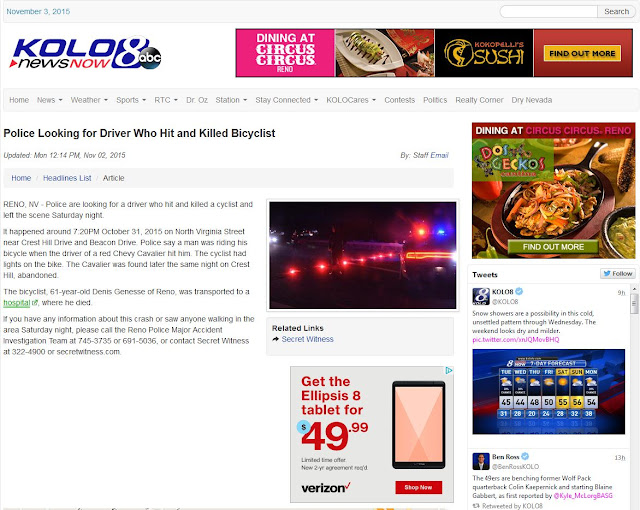 What kind of person hits someone with their car (bike/ped/or otherwise) and leaves the scene of a collision...letting a person suffer and die on the side of a road!?  I know why...because the penalty for drunk driving is higher than the penalty for hit and run.  I think it's time our legislature steps up and changes this.  I think if you leave the scene the penalty should be the same as the injury you caused.  They die...you get the death penalty.  Broken leg....get out the sledge hammer.  Might be harsh...but to avoid this penalty all you have to do is have a soul, be a decent human being, and stop to call for help if you hit someone!  I bet there wouldn't be too many hit and runs if it worked this way!
Posted by Riding in Reno at 9:26 AM No comments: