NZ room with a view ! 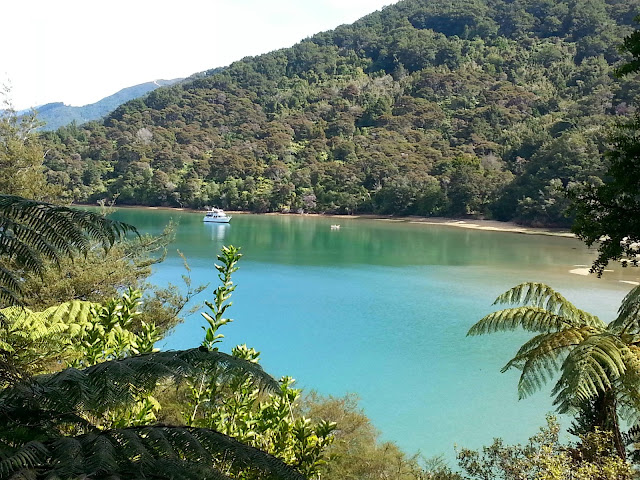 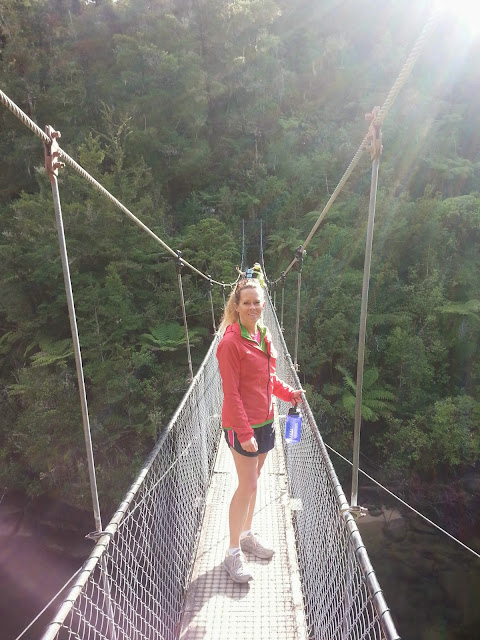 Posted by Riding in Reno at 6:16 PM No comments:

It definitely involves some biking and beer! 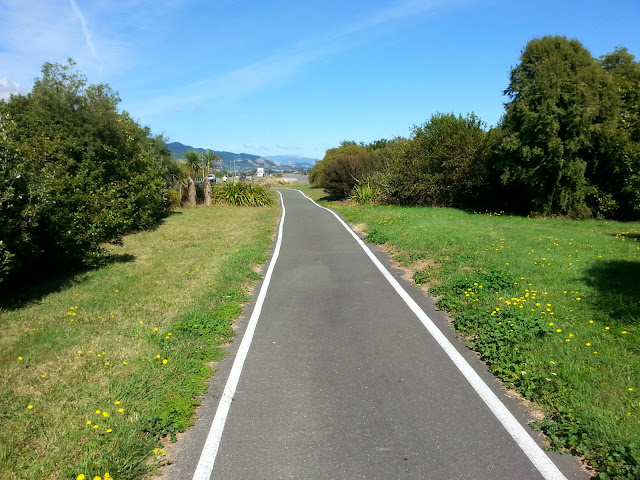 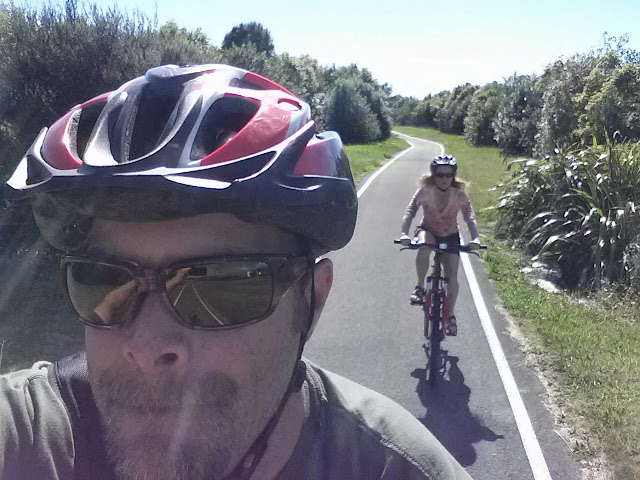 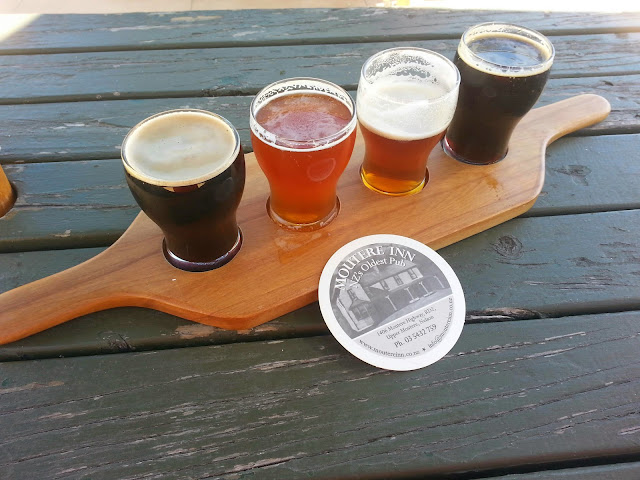 A bike is always a bit in flux for me.  Fenders added or removed, changing a stem to improve riding position, swapping out touring tires for something more aggressive, and of course modifying racks, bags, and touring gear.  Partially, this is because I have too many several bikes.  Part of it is because I actually like messing with things.

Lately, at least in my mind, I've been gearing up for some off road touring.  I guess the popular term is gravel grinding.....an extended ride 75% or better on back roads and trails with a relatively simple gear list.  The grand plan is a route like this between here and Bend, OR.  I'm working on it from this side and a friend of a friend is working on it from the Bend side.  I'd say right now about 65-70% of the route is mapped.  So with this in mind, I've been tweaking again on the Fargo.  Right now here's how it's looking. 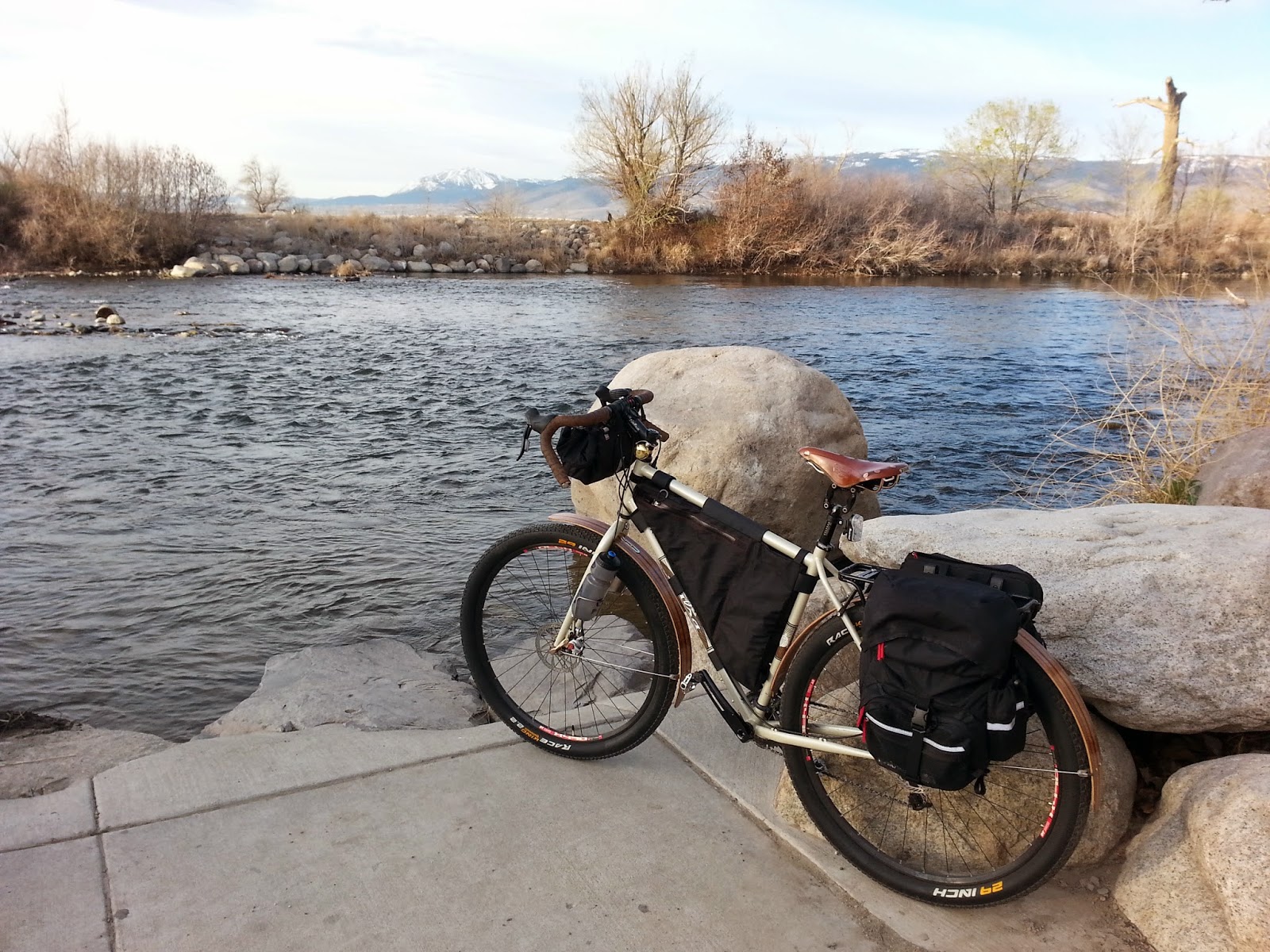 Basically, it's a Salsa Wanderlust rear rack with some REI panniers (which are currently on loan from the Preacher), a Revelate designs frame bag, and the Revelate Sweet Roll handlebar bag.  The panniers and frame bag are pretty self explanatory.  The Sweet Roll bag is kinda unique and cool.  Basically it's a dry bag, open on both ends with roll type closures.  So depending on how much you put in it you can make it larger or smaller.  It's mounts easily and has quick release clips that make it a "snap" to take on and off.  It also has multiple lash points and tubular elastic cord to hold maps or any additional bags you might want to attach to it. 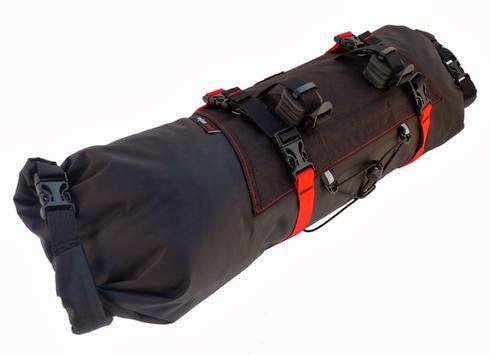 The only thing I'm toying with is the rear rack and panniers.  While a traditional touring setup and capable of holding quite a bit of gear, they may not be ideal for the rougher terrain.  This would be an alternate configuration with an additional Relevate bag called the Viscacha rather than the panniers. 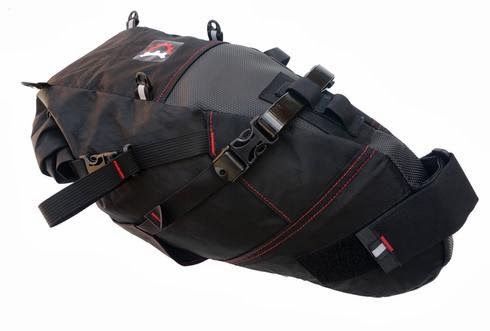 As you can see it holds quite a bit....but not as much as the panniers.  So I guess its all about how mimimalist you can be.  Anyway, that's what I've been messing around with, so I thought I'd share.  Hopefully, you're enjoying the potential that spring brings to your bike configuring efforts.

Posted by Riding in Reno at 8:54 AM No comments:

If you don't remember why you ride....

Then just look at this picture.  You just don't see this on your highway or local road commute.  Sunshine streaming through the trees in a park right along the river. 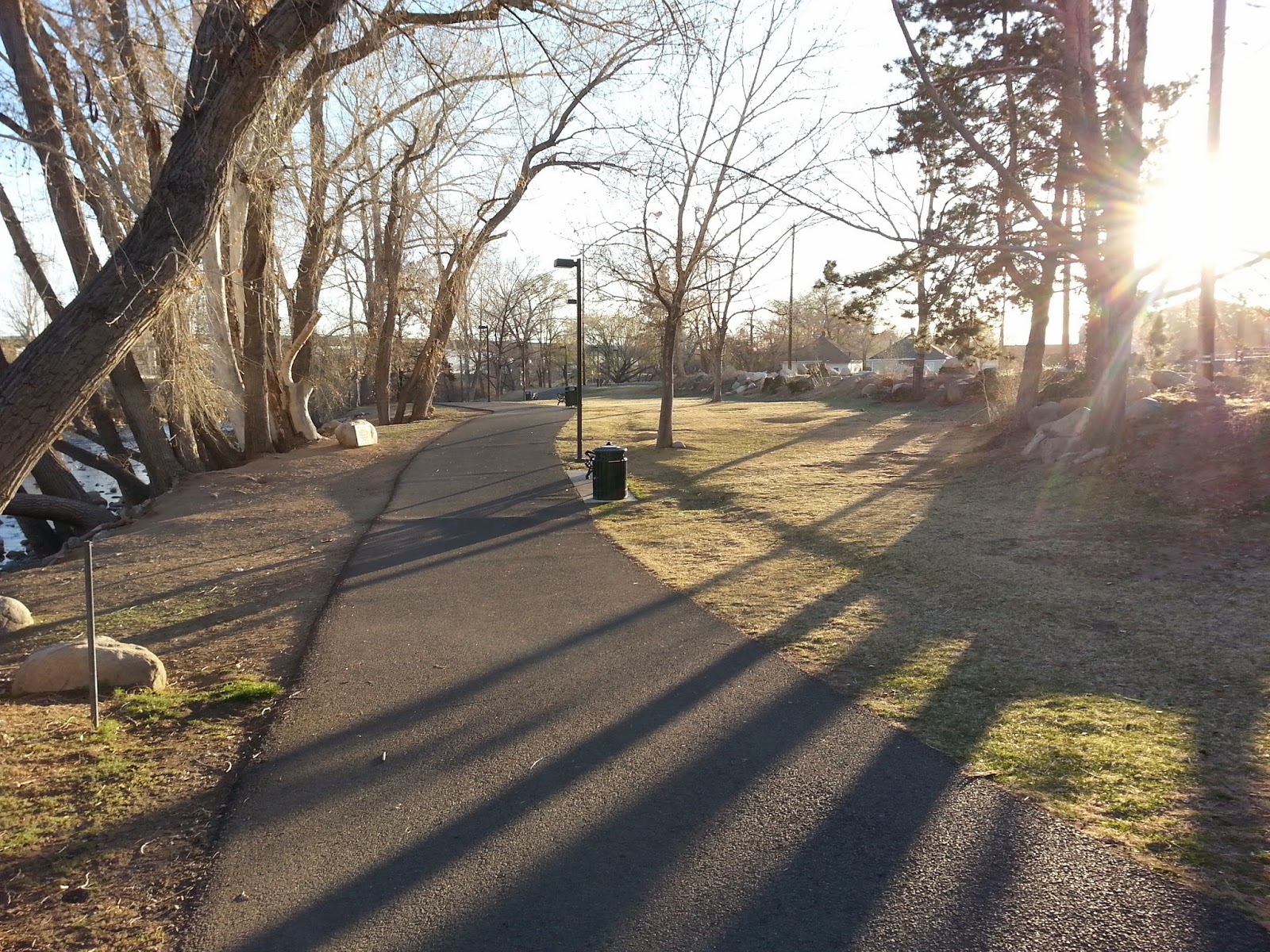 And yeah, it was about 30 degrees when I headed out the door for the ride this morning.  So I know why you hesitate, but a t-shirt, long sleeve t-shirt, and a windstopper vest is all it takes to keep warm while riding in these temps (well...pants, and a hat and gloves help).  So get out there and enjoy the great morning sunshine with a bike commute.
Posted by Riding in Reno at 8:40 AM No comments:

I posted last week that I had gotten sick of flat tires on the Fargo and decided to go tubeless.  So I dutifully ordered the stan's no tube kit.  I've been sitting on it for a week (mostly because I'm lazy)....but I finally got around to it this weekend.  It's a bit of a messy process, but they go together pretty easy.  Here's how it looks.

Finally, air that baby up and watch the solution do it's magic.  Basically you roll the tire around to any place you see soapy bubbles and the stan's pugs the leak in a few seconds.  I would note here....you want an air compressor for this.  To get the bead to seal the first time you need to pump it up really fast.  If you were using a hand pump, I don't know if you could do it....at the very least it would be rather hilarious to watch someone try to pump that fast.

I don't know why I didn't take pictures of the inflation and sealing.  I guess I didn't have enough hands at that point.

Overall, the whole process, while a bit messy isn't too bad.  These tires were definitely not new and had plenty of holes and gashes and the Stans handled them all after a bit.

Wifey and I rode downtown to try to hit Under the Rose Brewing, but they were closed (even though they said they were open).  Along theway down 4th St. I hit something big.  Well, big enough that I had a puddle of Stans and lost tire pressure down to about 10 psi.  I wasn't that amused that it wasn't sealing.  However, after walking the bike for a block or two, it seemed to have sealed up.  I road it over to Old Bridge Pub and then the 3 miles home with out further issue.  And this morning I pumped it up and rode to work without problem.  So....so far it's looking like Stans definitely keeps you going without much work!

Ok, I'd actually argue it was a great weekend for any type of outdoor activity you might enjoy.  For me however, there was mountain biking, a little trail running, and some social town biking.  I'll just dump some pics and hope you had as much fun in the good weather as I did.

And although this picture wasn't taken immediately following my ride....this was how the weekend on bicycles ended!

Posted by Riding in Reno at 9:45 AM No comments:

I just saw this article over at RGJ.com.  Looks like the guys from Urban Roots are going to try growing hops in the high desert!  The Reno beer scene is actually showing some good signs, with Under the Rose (finally) up and running and another new brewery in the works.  Getting some local grown hops would be pretty cool!  You can click on the article to be redirected to the full thing at RGJ. 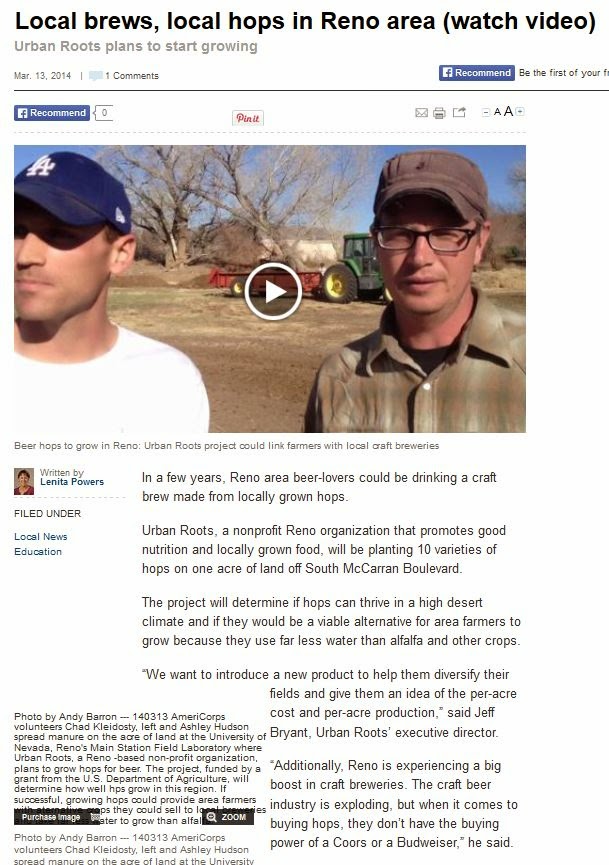 Posted by Riding in Reno at 8:36 AM No comments:

Things to practice before next season's cyclocross series!

Posted by Riding in Reno at 2:42 PM No comments:

Bicycles in the news....Reno Bicycle and Pedestrian Conference.

Posted by Riding in Reno at 8:15 AM No comments:

Email ThisBlogThis!Share to TwitterShare to FacebookShare to Pinterest
Labels: Bike / Pedestrian Conference, bikes in the news

The Growler Cage! Here's to Bikes and Beer!

Yeah, I think I might just have to get (or make) one of these!  If you feel the same you can check them out here.....growlercage.com. 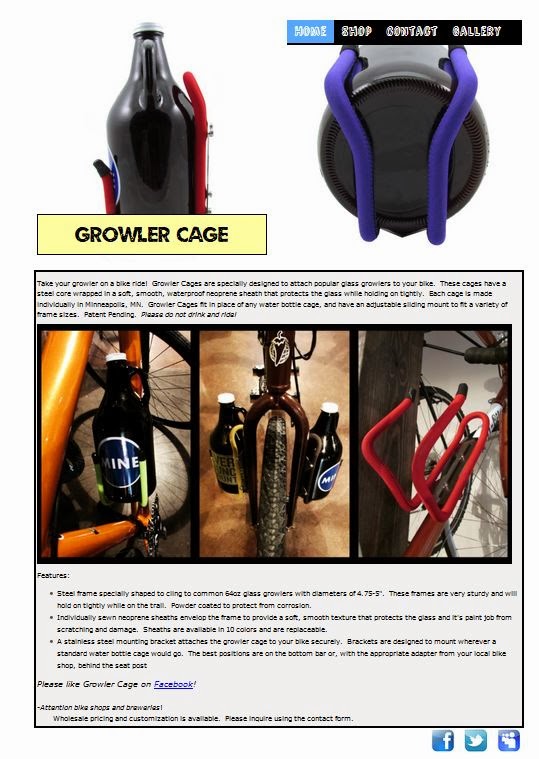 Posted by Riding in Reno at 9:29 AM No comments:

You just never know what you're going to get for weather in Reno this time of year.  The sky looked turbulent and was spitting rain when I left the house.... but turned out to boast rainbows and sun under the edge of the clouds.  The solid tail wind all the way into work didn't hurt either! 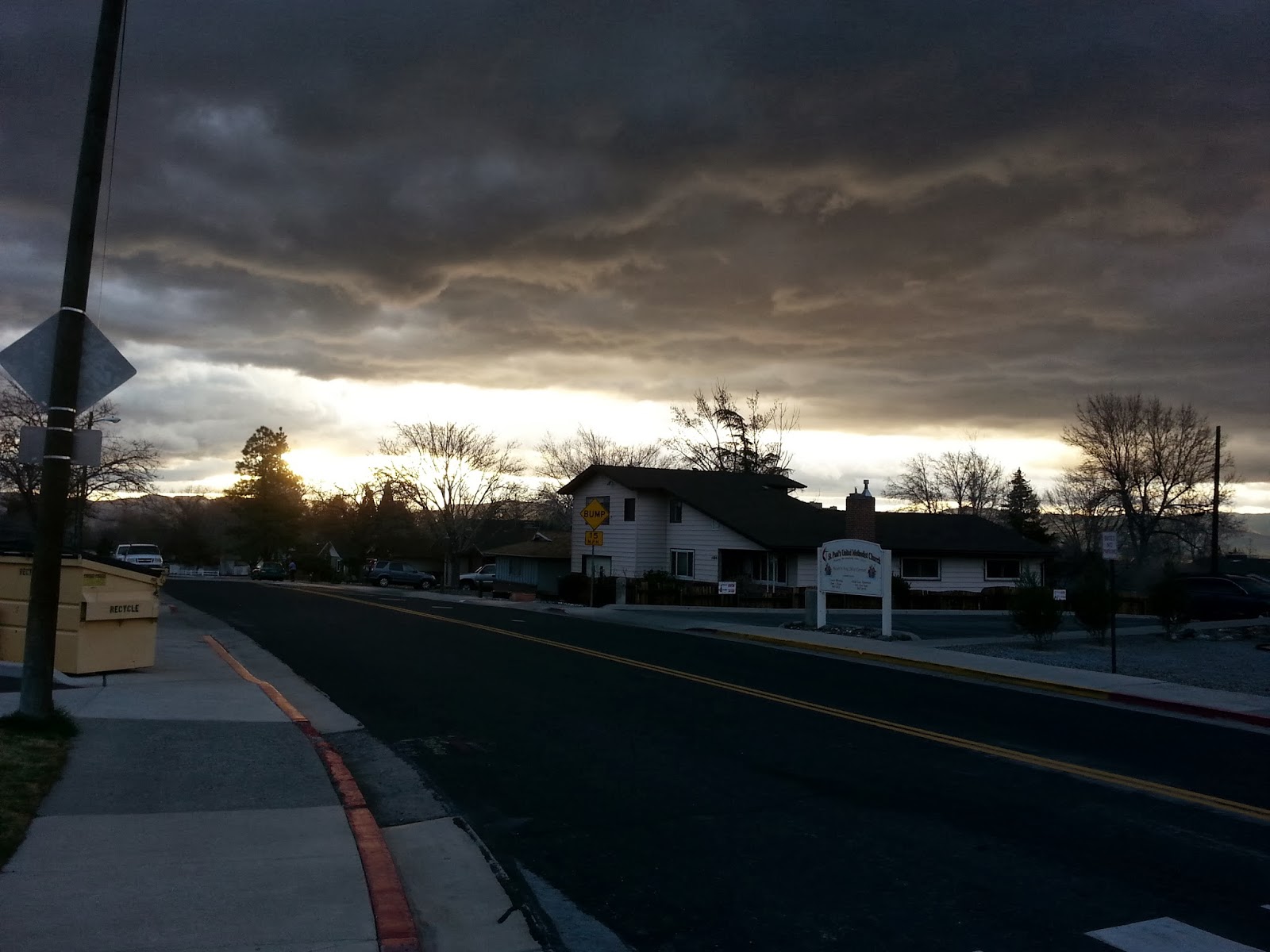 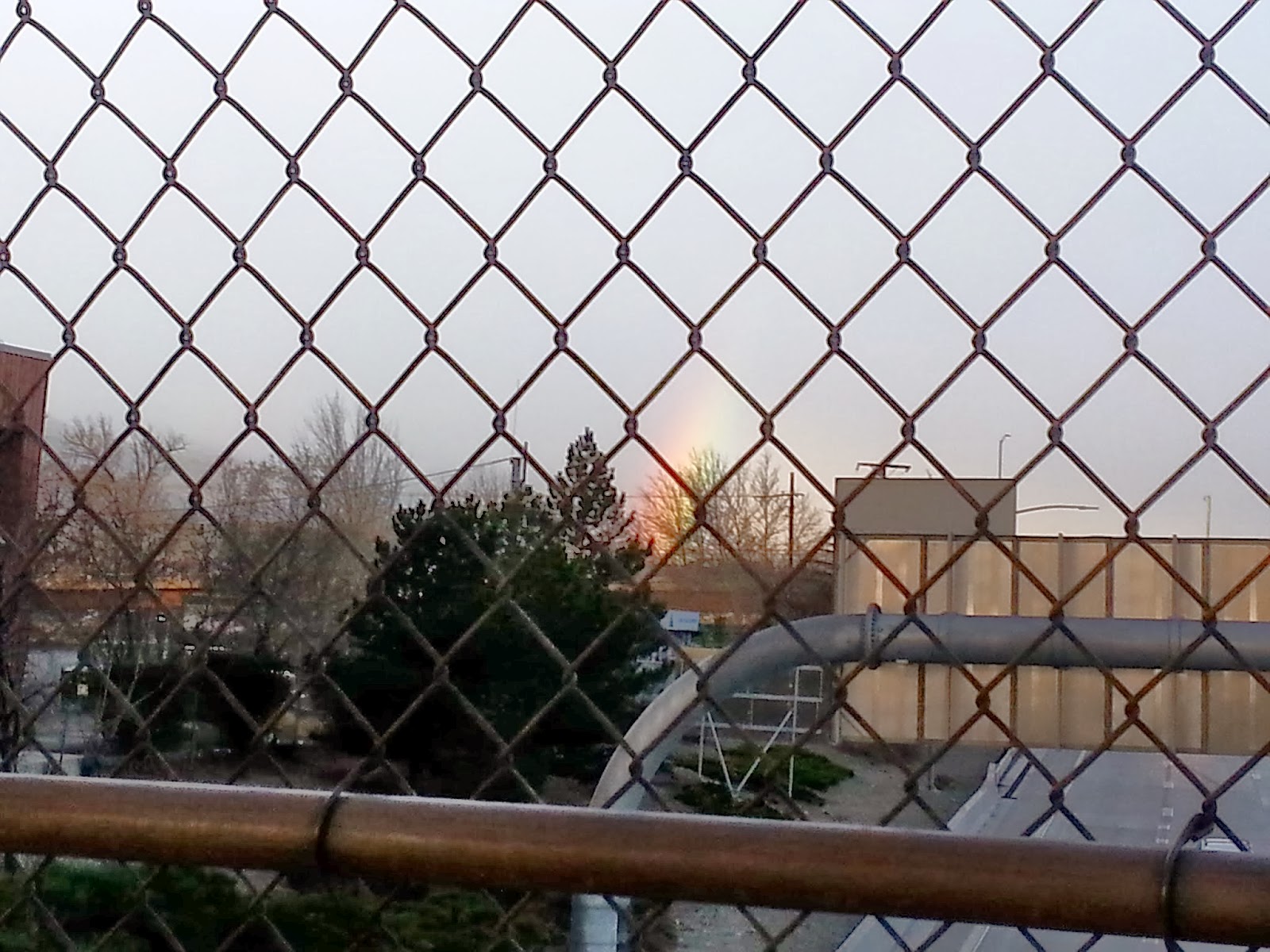 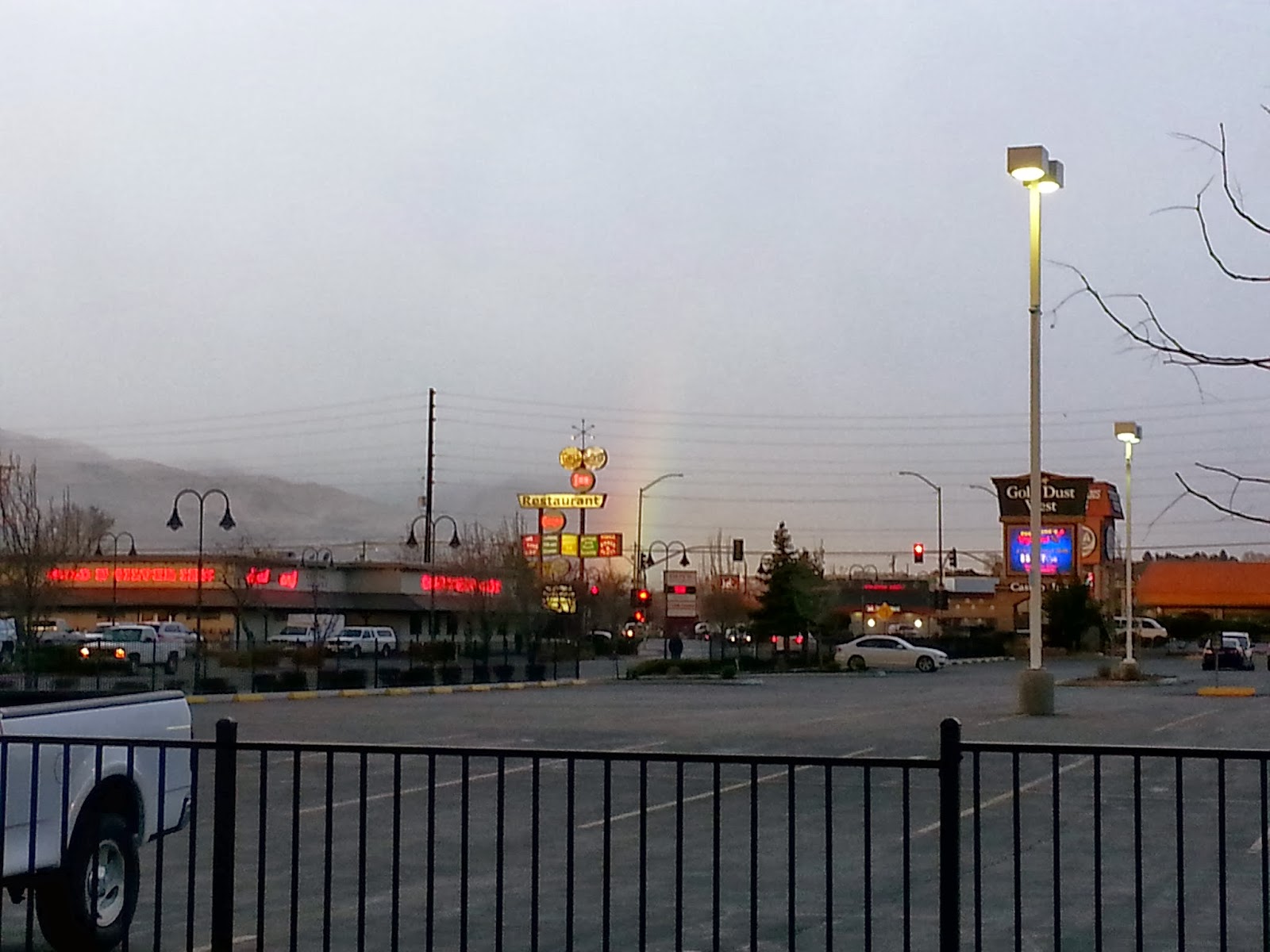 Posted by Riding in Reno at 8:16 AM No comments:

Things to do this weekend.... 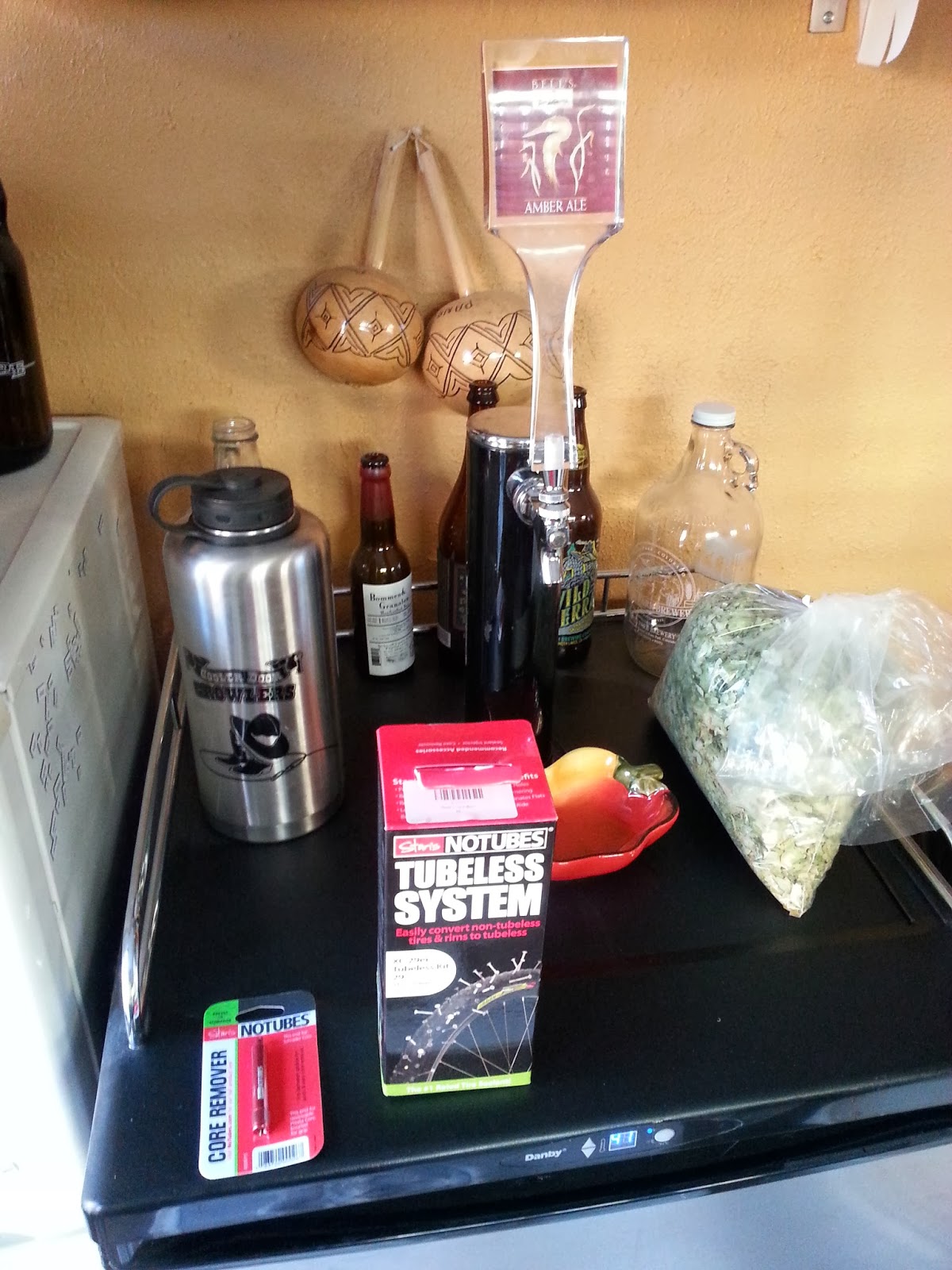 Yep, the Fargo is going tubeless.  I don't know what it is, but I seem to get a ton of flats on it.  Maybe it's the lightweight nature of the Race King tires....maybe Reno is goat head central....maybe it's because I don't have lines in the tires (the only bike).  Hmmm...I kinda forgot I don't use liners on it, that would probably be the problem.

Well, anyway, I have always read about tubeless setups and it will definitely save a bit of weight compared to adding liners.  So, I'll be giving it a try this weekend.

It's also no accident that the picture includes a picture of the tap....there will be beer involved or I'll probably get cranky.  And for some of you who are probably wondering, that is not a huge bag of pot....it's hops (e.g. for making beer)....and I may or may not get around to that this weekend.

So anyway, enjoy filling your weekend with bikey stuff.

Posted by Riding in Reno at 8:12 AM No comments:

I'm already thinking about fun things for the weekend....both can be accessed by bike! 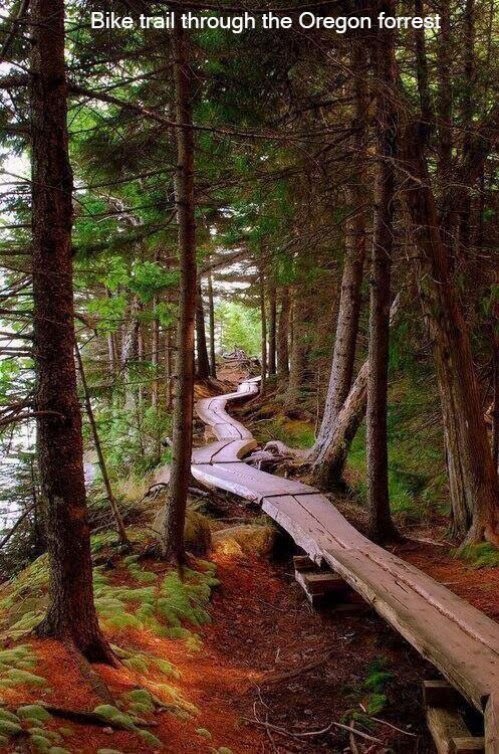 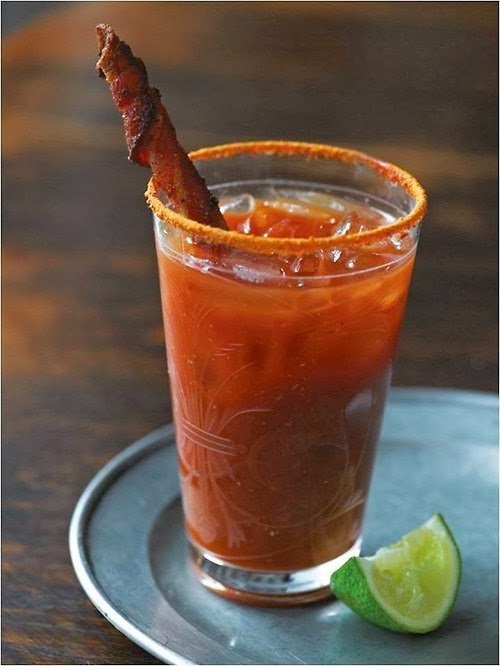 Posted by Riding in Reno at 8:11 AM No comments:

Biking is for Girls....no really it is!

And this video clip from the Pathlesspedaled.com proves it!

That's right....it was a long weekend in Napa with good friends.  Wine wasn't the focus, but it pretty much has to play a roll when you're in Napa.  Basically, wifey and her friend (let's call her shopper girl) were doing the marathon and the bike riding husbands were hanging out and shuttling girls and luggage from hotel to hotel.

So let the marathon begin.... 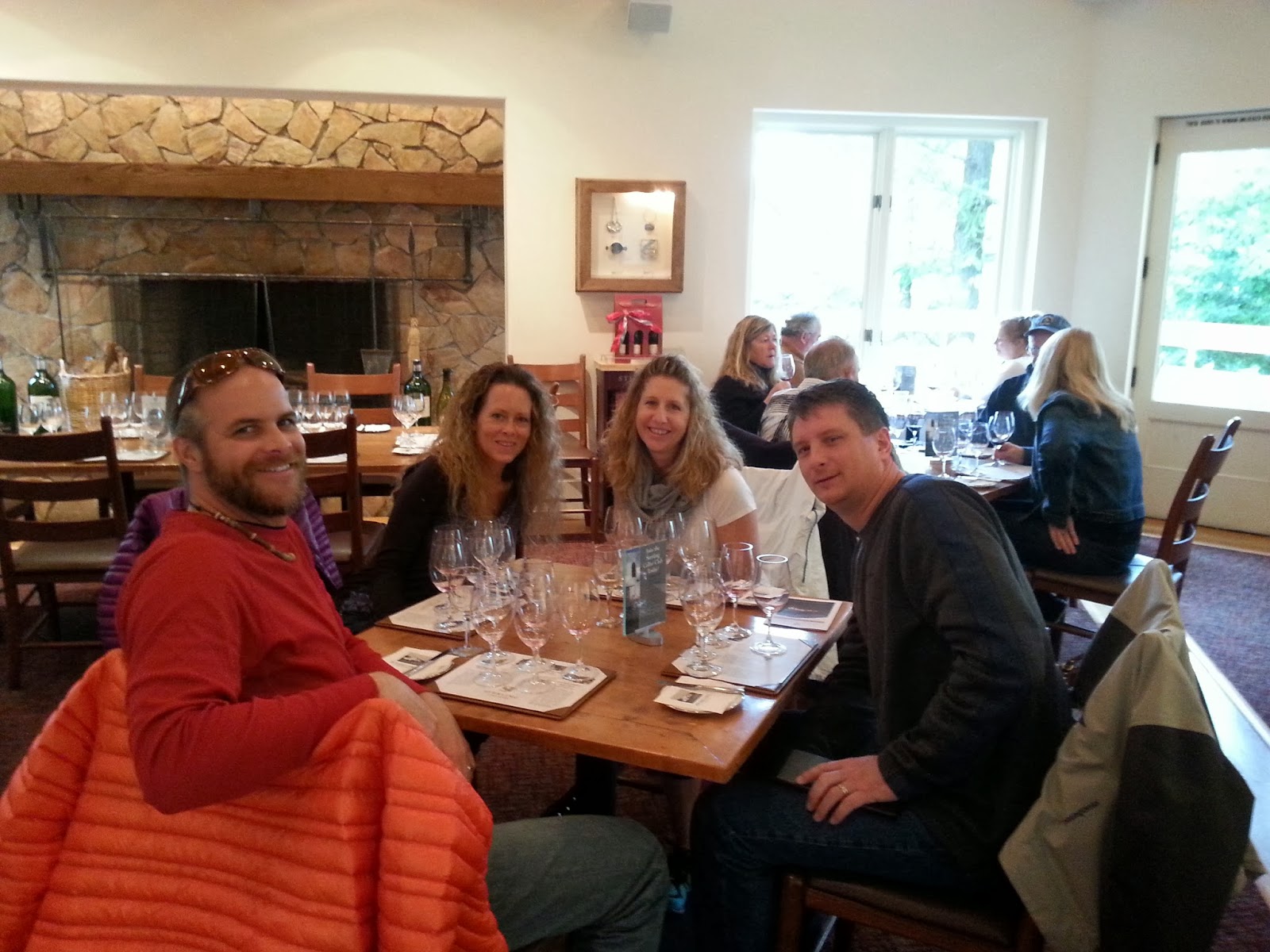 Opps....not that kinda marathon.....this one.  And yes, it's not the beginning it's at the end.  After all finishing is kinda what matters!


Then it was time for wine!