Zero Strap Backpack....The next hipster must have!


Yeah, yeah....say what you want.  You know you totally want one!
Posted by Riding in Reno at 7:24 AM No comments:

Looks like they are finally putting in some separated bicycle bicycle infrastructure in Reno!  Evans Ave. (which runs from downtown by Louie's Basque Corner up to McCarren along the East edge of UNR) will now have bike lanes from 2nd St. to Highland Ave. and separated multi-use path from Highland Ave. up to McCarren.  A really nice addition to tie UNR to downtown for anyone on bike.

While I'm glad to see this project happening....I'm a little embarrassed for the RTC / UNR as this is a project that was proposed back when I was the Chair of the Bicycle and Pedestrian Advisory Committee (BPAC) almost 4 years ago.   Projects like this still represent the low hanging fruit...meaning there was no opposition to the project itself....we're just really slow to get the ball moving!

I hope that we can rebuild the crew that pushed for these projects several years ago and really turn Reno into a bicycle metropolis that it has the potential to be.  If your interested in helping drop me a line!
Posted by Riding in Reno at 8:52 AM No comments:


Sorry, I know it isn't biking related....but you have to love the snow if you live in Reno.  The back country was amazing this weekend as long as you were careful of the avalanche dangers.  Our group skied Rabbit Ears for three laps with waist deep powder and powder over your head at every turn!  Best skiing I've had in years.

I ducked out a little early and the remainder of the crew skied one more lap on Proletariat (higher angle bowl)....and that's where the scary stuff happened.  While I napped in the van, one of the folks in our group took a little higher angle run than the rest.  He triggered a really big slide that caught him, sluiced him through some trees, and partially buried him.  Any way you look at it....he got really lucky.

So, get out and have some snowy fun....but be careful when you do it!
Posted by Riding in Reno at 9:12 AM No comments:


Patagonia and Steamboat ditch (Tom Cooke) trail has been a staple of my running diet for years.  And since backcountry skiing was off the table with this storm and some ridiculously high avalanche danger....running was my next best choice.  This is what it looked like around 9 am Saturday....apparently it is a darn popular option on a snowy bluebird morning!

The key to running in 6-8 inches of wet snow?   Waterproof socks!  If you run, ride, or just generally like being outdoors regardless of the weather a good pair of Showerpass waterproof socks will make your life a little bit better.  I discovered them (not shockingly) while riding in Eugene, where rain and wet is a daily part of commuting....but they will get plenty of use in conditions like these! 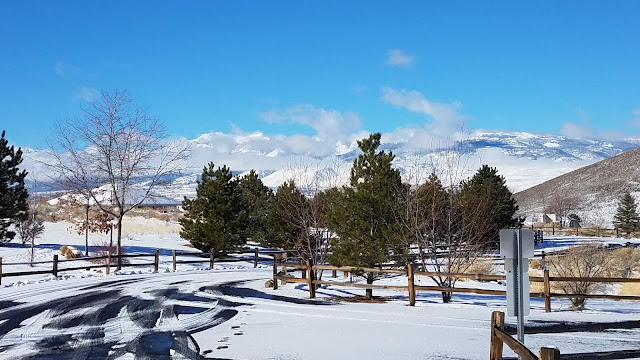 They proved equally as useful for a Sunday morning follow up run at Hidden Valley Park.  While I've know about these trails for years, I rarely used them.  So if you're looking for some new terrain for mountain biking or running do some homework on Hidden Valley.  I'm sure I'll post more since I'm living here now....but there are a ton of great options.

Hope everyone had as much fun in the snow this weekend as I did!
Posted by Riding in Reno at 8:03 AM No comments:

How did you like the roads this morning?  Just a touch icy wasn't it.  Maybe you should have traded in four wheels for two?  This is what the bike paths looked like this morning. 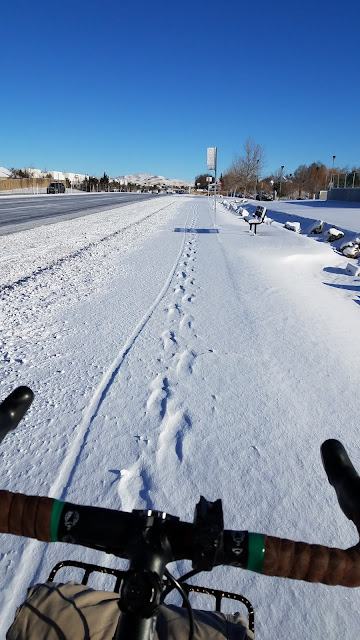 Yep, they get the same snow...but don't get packed down by 4000 lbs bumper cars....so it's not icy at all.  You do need to pay attention of course....but I'd argue its significantly safer than the roads were this morning. 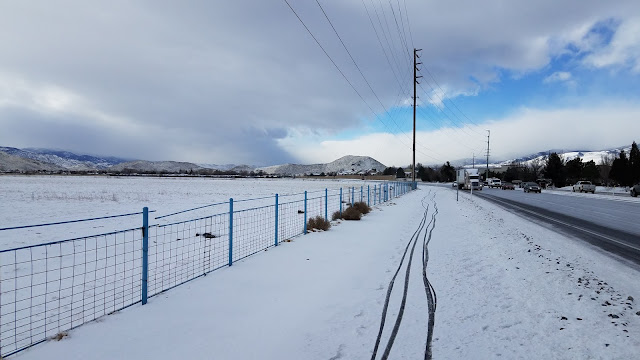 And would you look at that...apparently I'm not the only one who braved the fresh snow this morning! 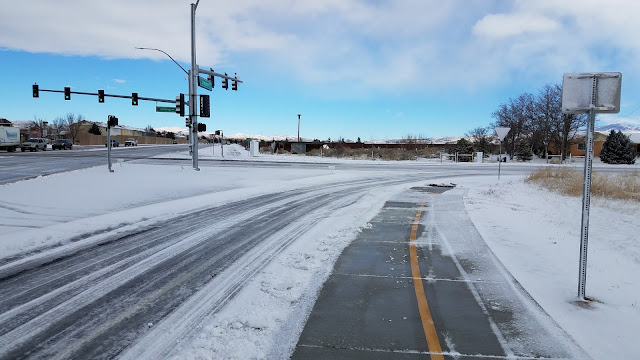 In all fairness, I did have a short, six mile trip (out and back) I had to make this morning which was mostly on separated bike infrastructure.  However, by my return trip at 10am the bike path had been plowed and is down to nice concrete with no ice.  Still a huge improvement from the roadways I drove subsequently to get out to the east side of town.

So while my point is to show the bike paths work well even in the winter, I will caution anyone who wants to give it a try.  The part of this ride that I don't have pictures for was on Mill St.  There are bike lanes but they are still filled with snow and snow plow debris.  These are no picnic and put you adjacent to vehicle traffic that is literally skating on glare ice at 40 plus miles an hour.  Not a great situation.

But...if you have a little moxy and a need to bike commute, snow days can be pretty darn fun riding!
Posted by Riding in Reno at 11:02 AM No comments: